This biography was written by BieberZone. You are not allowed to copy it unless we have given you permission.
COPYING NOT ALLOWED!
KOPIEREN NICHT ERLAUBT!
COPIER NON ADMIS!
KOPIËREN NIET TOEGESTAAN! 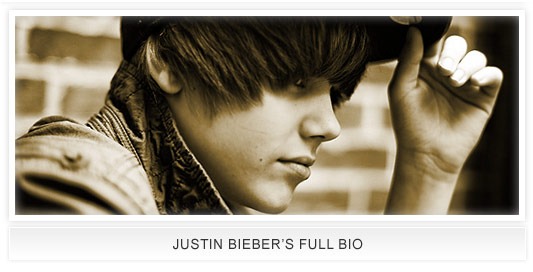 This biography was written by BieberZone. You are not allowed to copy it unless we have given you permission.
COPYING NOT ALLOWED!
KOPIEREN NICHT ERLAUBT!
COPIER NON ADMIS!
KOPIËREN NIET TOEGESTAAN!

Justin Drew Bieber was born on March 1st, 1994 in London or Stratford, Ontario, Canada to Jeremy Bieber and Pattie Mallette. His parents split up when Justin was only 2 years old, and he and his mother went through rough times since they had hardly any money. Justin says "I had a roof above my head and I basically had everything I wanted". His father moved to Winnipeg and recently moved back to Stratford with his two children (Justin's half-sister and half-brother) Jazmyn (born in 2008) and Jaxon (born November 20, 2009).
At school, Justin is a striver with straight A's. He hopes to one day go to college, get a good job and be able to provide for his family.
Justin started drumming at the tender age of 2, "on anything I could get my hands on". He was given his first drumkit and drumming lessons at age 4: "What mom in her right mind would buy a 4 year old a drum kit?", he now says about where his musical journey began.
He got interested in other instruments as well after seeing people play them at his church. He started to play the piano at 7, picked up the guitar at 9 or 10 and introduced himself to the trumpet at age 13. And although he had been singing around the house his entire life, Justin did not take it seriously until he was about 12 years old and entered a singing contest called Stratford Star in his hometown. "No one actually knew I could sing until then."
Justin and Pattie posted videos of the competition on YouTube for friends and family who couldn't be there. This is how many other YouTubers discovered him, catching the eye of well-known people including Def Jam employee Scooter Braun (who is now his and Asher Roth's manager), Usher and Justin Timberlake. A lot of passers-by also saw him busking in front of the Avon Theatre in Stratford.
Apart from developing his extraordinary musical skills and studying hard, Justin also spent a lot of time on sports such as skateboarding, icehockey, basketball, running (for which he earned many trophies) and many more. He also took interest in dancing, which can definitely be seen at his concerts where he and his backup dancers do the best they can to put up an incredible show each and every time.

Justin attended the Jeanne Sauve Catholic School (where pupils were partly taught in French), Bedford Public School, Stratford Northwestern and Downie Central Public School. In July 2008, at age 14, he moved to Brookhaven, Atlanta, Georgia (USA) to officially start his recording career. In October 2008 he officially signed to Island Def Jam and Usher. Until his graduation in 2012, he had a teacher who travelled with him.

This boy is not an ordinary singer seeking fortune in the music business, though: he is gifted with exceptional musical, sportive and moral talents. Apart from having taught himself to play the guitar (which used to be about the same size as he was), he also taught himself how to play the trumpet and keyboard. He started drumming at age 2 and got his first drumlesson at 4. He used his drum skills for a djembé video, too.
Justin is also a good dancer. Videos can be found on YouTube.

"(...)Justin plays with the drum kit set for right handed but he left handed so he just plays 'open' - so he doesn't play faster with it set up left handed. This is his first instrument - he started playing at age 2, lessons at age 4. Its the only thing he's had lessons in, so since he started playing 'open' so young, he won't switch now. (...)

Apart from being a great musician, Justin also enjoys sports. He has made videos in which he demonstrates his soccer, hockey, basketball and golf skills. He also likes skateboarding.

Justin was discovered on YouTube by Scooter Braun, who contacted his family. He flew Justin to Atlanta, where the then 13-year-old performed "U got it bad" by and for Usher. The famous singer actually wanted to sign him right there and then, but first Justin had a meeting with Justin Timberlake. In the end Justin got signed with Def Jam. "It turned out Usher's deal was way better," he says, "having LA Reid as a backup."

And even though Justin is now known worldwide for his music, he hasn't forgotten about his roots. "I will never forget, where I once was - and where I come from."

Trivia
-Justin is a dedicated Christian. While living in Atlanta he attended Buckhead Church.
-according to Pattie, music and sports are Justin's great passions. He dedicates most of his time to these.
-Justin has been dating Selenaz Gomez for a while.
-he had numerous girlfriends before her.
-he likes girls with a nice smile, nice eyes and a great personality.
-in his 'Because of You' cover (originally by Ne-Yo), a scar can be seen below his right eye. This was caused by a branch whip while hiking in the bush with a friend.
-Justin is left-handed (or actually cross-dominant: he writes and plays instruments left-handedly, but he throws and plays golf like a right-hander)
-the first instrument Justin learned to play was a drum kit. This is also the only instrument he has lessons in.
-his best friend from Stratford, Ryan Butler, stars in Justin's "One Time" and "Somebody to Love" videos.
-he has a papillon dog called Sam whom he got when he moved to Atlanta. Sam now lives with Justin's grandparents in Stratford because Justin is hardly ever at home. He temporarily owned a monkey named Mally, now he owns a cat named Tuts.
-he started to take singing seriously at age 12, entered a competition and made it to second place.
-he has learned a lot of French over the past few years and has recorded French versions of One Time (which isn't out yet) and One Less Lonely Girl
-he used to play hockey for the Atlanta Knights (before going on tour). He was #18.
-according to Pattie, Justin used to work very hard to keep up with his full-time job and school work.
-he has been talking with Nickelodeon and Disney about having his own show.
-he has stated that he misses his friends in Stratford, but likes the big city as well.
-Usher introduced him to LA tastemakers in April 2009 and called him Def Jam's priority.
-he is said to suffer from migraine at times due to all his hard work.
-he initially posted videos on YouTube for friends and family but when people started to subscribe to them, he posted more.
-on his original MySpace, Justin stated that he wanted to go to the school of ministry someday and travel the world to spread the word of God.
-movies Justin enjoys: the Rocky series, August Rush, Drumline, Saving Private Ryan, Cars, Step Up, You Got Served and Guardian.
-artists he likes: Usher, Ne-Yo, Chris Brown, some 2Pac, Rascall Flatts, Elliott Yamin, Billy Talent, Lifehouse, T-bone.
-television series he enjoys watching: American Idol, Greys Anatomy, Smallville.
-he took English, biology, chemistry, algebra and history, amongst other subjects.
-he says English is his favourite, and math is his least favourite subject.
-he says his mom's got horrible driving skills.
-he says he doesn't like school despite having a 4.0 grade point average.
-he graduated in 2012.
-he can solve a completely scrambled  Rubic's Cube in less than 2 minutes.
-he stated that he originally wanted to become a hockey player, incorporating his number (#6) in his signature.
-he says he would like a Dodge Charger when he gets his drivers permit. He eventually got a Range Rover from Usher, though.
-he now owns a number of other cars, too, including a Fisker Karma.
-he wore huge black glasses on KissFM, but they were only used as a prop: he does not need them to see.
-he played a role in Nick Cannon's "School girls" film (which aired on Nickelodeon).
-he's really into videogames. He owns a PS3 and an Xbox360.
-his great-grandfather comes from Berlin, Germany and taught him how to count to 10 in German.
-he was in London (UK), Berlin, Munich and Cologne (Germany) in the summer of 2009. It was his first time in Europe. By now he has been to many other countries as well, having been on a world tour in 2011 and 2012, and another one set for 2013.
-he busked in his hometown for a while, made 3000 dollars and took his mom on a vacation to Florida.
-he used to wear a purity ring (which means he won't have sex before marriage - check out the pics of the Kid's Choice Awards).
-he is said to have recorded a duet with Justin Timberlake
-he says he wants to learn more German to be able to speak to his German fans.
-he has been skateboarding since he was 4.
-he is very claustrophobic because when he was little, his cousin locked him up in a toy box.
-he likes to play sports games and typical Nintendo games.
-he got to watch a basketball game and movies with Justin Timberlake in 2008.
-he wishes he could understand girls better.
-he wears a dog tag that was actually from a fan's close friend. He died in the war and Justin wears it as a memory.
-Sour Patch Kids used to be his favourite candy, but his fans gave him so much of it that he doesn't like them anymore.
-he has a half-sister Jazzy (Jazmyn), who was born on May 30, 2008. She is now five years old.
-he has a half-brother Jaxon, who was born on November 20, 2009. He is now three years old.
-he took his friends on a vacation to the Bahamas early 2010.
-he says that, when doing a photoshoot, he will not wear something he really does not like.
-Pattie used to take away his phone or laptop whenever he was in trouble. 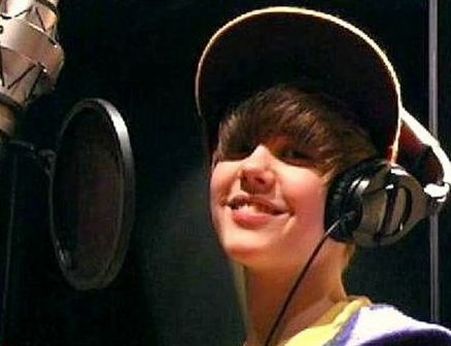